I gotta admit, I’m working my ass off here! Yup, that’s right, I got a lot of things in the works right now, so I thought I would share some stuff with you, plus it makes a change to the posts of late, given they are just promo and adverts.

2020 is going to be a year of new innovation for me, I mean, I can keep spitting stuff out, and that’s fine, but life is a learning lesson, and learn I shall. In the hope that my old brain will let me develop new skills that I need to achieve the things I have stored in this noggin of mine!

Being a self publisher of digital content mostly, many of you will know that it’s not always been that way. Sure I’ve always dabbled in anything creative, but I’m an advocate of good old fashioned physical media, be it whatever, so the next logical step is to bring some of these digital items into the real world.

It’s all well and good making these publications, but I love putting stuff in print, whatever it is, so it won’t surprise you that plans are afoot to evolve toward this.
Before I get into that, here’s a list of some of what is getting done in some way shape of form. I can’t tell you a definite release schedule, that’s not how I roll, but expect to see these things over the coming weeks. (unless I get distracted, or get inspired to do something really exciting, for me anyway!!) 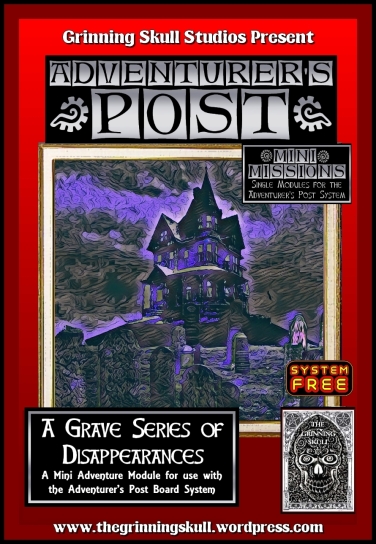 This is an addition to the Adventurer’s Post series which is working out to be not so “Mini”, so there’s probably a change in sub-series title going to happen! It involves the players being hired to act as security for a Undertakers firm, where, surprise surprise, a lot of the cadavers have vanished! Although the plot sounds simple, a more insidious scheme is at hand!
This should be a fun scenario to play out, and even so it is designed for the series, it can be used as an adventure without The Adventurer’s Post Volume 1.

This is a fantasy version of the 100 Mercs and 100 Hired Starship Crew titles, basically 100 NPC adventurer and mercenary types that can easily be rolled up and added to your generic fantasy games. I think it will serve many of you well, and make a great companion to the 100 Pirate Crew title as well!

Originally was intended to be made available for Patreon subscribers, but since I changed plans, it’ll be a PWYW (Pay What You Want) title on DriveThruRPG. Yes, it’s pointless, and yes, I know it’s not a classic (Irony, Sarcasm and all that, it’s meant to be pointless!) but, it will provide some GMs out there with some back details here and there, and be sprinkled with our usual humour.

Expect that soon as it has been mostly finished, although I can’t say when, but should be over the next week or so. I’ll add that the Pointless Classics range has been very popular. Could it be that they don’t cost anything? I’d like to think that it’s my skills at content writing, but I’m guessing the former!

One for those of you that might want to start making your own releases on DriveThruRPG, I thought it was time I shared a few things I’ve learned over the last 5 years or so, I’m no expert, but I think it’s sound advice on a variety of subjects and processes involved in doing hobby publishing on there. These are my own findings over the years, and with over 300 products under my belt now I hope I can pass on some good advice to new publishers from a first hand view. Consider me your own Yoda!

Victim Cards for Everybody!!

As it says in the title, this is a print yourself (and friends and family, in fact everyone!!) a variety of Victim cards you can give to those “Special Snowflakes” who just haven’t developed a thick skin yet! While not entirely RPG or Hobby based, I just had to do it. Be warned it’s not for the politically correct SJW crowd, and will for sure cause offense, which is 100% intended! I know some of my products have caused offense, but who ever said I was going to be the type of publisher that was altogether nice and appeal to that crowd!
Expect that in a few weeks, I want to include as many types of Victim cards as I can, that way I can offend as many people indirectly as possible!

So what else is happening?

I have a lot of others in different stage of development, but these are just a few of whats coming soonest. I could list you at least 30 more I have in the works, but how long it will be until I get round to finishing them is anyone’s guess! It all depends on how inspired I get, you have to remember, some of these have a ton of different elements that I need to either create from scratch or find in some way, and as my skills have improved, my pickiness has increased. I can agonize for ages if I can’t get things as I would like, so I tend to shelve many until I work out how to proceed in a way that I’m happy with.

On to the next subject, what I’m working on right now, as a priority, is something I’ve been working out in my head for an age. You might have seen a small button on the Grinning Skull Publisher page over on DriveThruRPG, right at the bottom of the categories you’ll see one saying “Streets of Adventure” and Coming Soon.

This pertains to them both (don’t get me started on the Carnage Continuum setting, I’ll get round to that eventually from reams of notes and notebooks)

The Grimthorpe Chronicles has been on my mind for years now, existing in bits and pieces, not fully formed and will start this new line. The idea of Streets of Adventure is city/town based material that can be plugged in to virtually any fantasy game. While this is not entirely what Grimthorpe Chronicles is per say, it comes under this banner as the elements are the same, except Grimthorpe is a setting by itself. You can use them as a setting, or just plug in the bits you want and apply them to your own games and campaign locations.

This first title is a bit more than that, while it is to be expanded upon in plot and literary ways, the first piece is what is going to become a physical print product too. Call it a town in a box, but it is sort of inspired by the old GW Warhammer Townscape.
There will be an entire section of Grimthorpe contained in this product, both the digital release and the print & boxed (Yes, you heard me right. Boxed!) versions. I’m plugging away at creating houses, shops, and loads of buildings, tiles and accessories that when used together, should give you a huge environment to play your RPGsRPGs and Wargames with. Further releases will expand different areas, themes and ideas, while it will be backed up with RPG material titles that will supplement everything else! The digital version will be first, but I fully intend to produce a boxed version to save the hassle of printing it yourself.

In a nutshell, Grimthorpe East will be the first in this line of titles of the series. Primarily a residential section of the city, the digital PDF kit will contain at least 10 different basic house kits (Plus many accessories with each sheet to create many variations) 4 medium sized dwellings, 2 large houses (again all with additional accessories to create options) 1-2 Tower kits, A Tavern Kit, 1 Shop kit (with options to make a ton of different versions) 1-2 signs and accessory sheets (To further personalise your models) 1-2 floor plan accent tile sheets & tokens and at least 9 floor plan tiles to set your city onto (plus a 3×3 poster map floor plan as an option) The goal is to add extra titles that add on to the main product with new sections, buildings and accessories.

Plans to release in PDF version to begin, then develop a boxed high quality physical version to retail  (Pre-order system to cover costs with an Kickstarter or Indiegogo campaign, possibly?!)

The campaign may add new features such as paper minis, additional kits, exclusives, and possibly more for stretch goals, backer levels etc. An initial test print run will be done before proceeding with a crowd funded plan, if all goes well, it might not be needed….
There is an option of even designing a line of Grinning Skull Miniatures to accompany the release, but that is a project by itself, or partnering with other hobby companies to get this project into the world, time will tell…at this point, everything is subject to change, but I will make it happen in some way, shape or form.

How it’ll be done is being considered, but if the release is popular enough, I may consider a Kickstarter or Indiegogo to get the main print run & components made. I’ll keep you updated on this, as I’ll be working on this a while, since I want to get this right.

Also, as well as attempting to further my galactic conquest by new publishing on new platforms such as Kindle and their ilk, I’m putting together a few Epub/Mobi/Kdp books, but I’ll be doing a print run of my riddles collections with “Grinning Skull’s Book of Riddles“. The Riddles Series has been very popular, and this will appeal to more than the hobby crowd, so expect that within the next few months. I’ll attempt to get it as wide a release as I can, spamming bookshops and stores to see if they will stock it (which will teach me more about how to get a book to market, which will be invaluable in the future) but, I will keep you updated at my trials and tribulations in the self publishing business as I go!

I have a few other bits I’m working towards that are to test the market, like quick reference mini character cards for 5th Edition, which will be coming very soon, so keep your eyes peeled for that!

As ever, check out our stores at DriveThruRPG and our new Payhip store where you’ll find exclusive releases from both Grinning Skull and the new imprint, Goats Head (Titles Coming soon)

If you like any of these ideas and want to help, please keep liking our stuff, putting the word about, joining in the conversations, visiting both our sites, offering your comments and suggestions and spreading the word, none of these cost you anything, but help considerably to push toward the next step in our evolution. Of course, you could also buy our stuff as well, but I’ll be happy if we can create a buzz and a bit more of a community, that is worth far more than cash!

I want to thank you all for following us over the years, through the times of adversity and anguish, pushing through the dross of life stuff and bad health, I can say from the bottom of my heart, Thank you for your support and here’s to another 5 years of Grinning Skull!!

An artist of sorts, observer of the world. I just create stuff, my DNA dictates it. View all posts by grimace73

1 thought on “So, what’s in the Works? Behind the scenes at Grinning Skull Towers, something is stirring…”