Ploughing through the various ways of self-publishing in print is very interesting. So, I thought I’d share a few thoughts on the subject and show you an early version I have had done for quality comparison.

Back in the day, I remember the old indie RPG crowd in a similar position to Grinning Skull, and remembered the various ways of printing their home-brewed scenarios and sourcebooks and rules. Many were spiral bound for ease of use during play, so first off, I wanted to check it out for the old skool vibe. Since many of the titles in the back catalogue (Of which there are over 100!), many of them lack the large page count to justify such becoming an A4 spiral bound book without either compiling them or changing them enough for such a task.

As you can see, “The Witch’s Daughter” (GSAM01) scenario was a good fit, being that the 68-page count does actually warrant such binding. I can say, the printing of the front and back cover is perfect and glossy, the interior is lovely edge to edge printing of decent quality black and white. I can’t complain about this test version.

I hope to produce limited runs of several titles over time and offer them for purchase to see who would be interested in having a copy (If your interested in getting a copy in this or another format, please get in touch and I’ll give you more details) Print titles planned for this A4 format (Probably more likely to be in A4 Saddle-stitched format) will include Modules GSAM01 The Witch’s Daughter (Above) GSAM02 Singularity (Sci-fi adventure, coming soon) and GSAM03 Betrayal at Tarsus Mor (fantasy adventure, coming soon), plus there will be Grinning skull’s Book of Riddles (an edited and combined edition of 100 Riddles volumes 1 & 2), A collected and added to version of Grim’s Dungeons of Doom articles found on this site, and the next Grinning Skull Compendium/Annual for 2017.

Let me know your thoughts, interest and comments, either by the comments box below, or contact me via the form.

Also, a quick reminder, The Witch’s Daughter is still available from us in PDF format and as part of the “Witch’s Daughter Adventure bundle” deal that adds extra relevant titles at a discounted price. 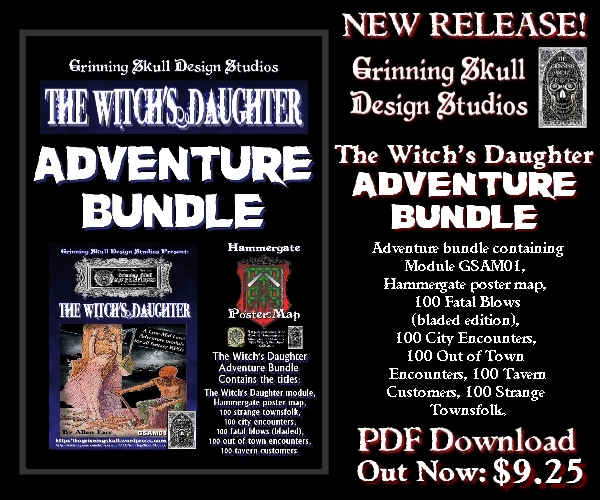