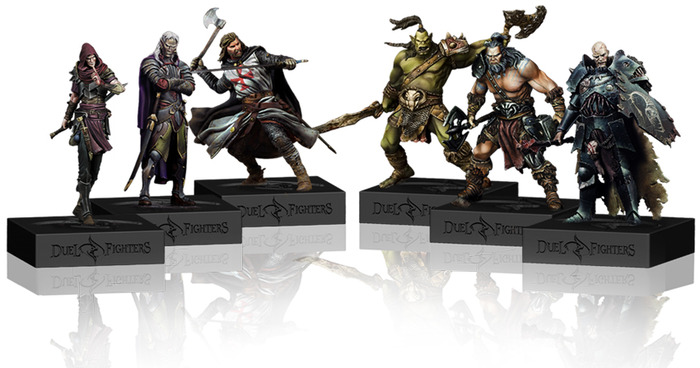 I thought I’d draw attention to this KS, a 75mm scale game no less (Could this be a new trend in scales?)

Duel fighters, like I said is a 75mm game of cinematic combat, with larger scale “highly detailed” resin figures, and accessories. With a slick presentation and stylish art, Duel fighters is certainly nice looking in the sea of other mini based crowdfunding campaigns, which is probably a good thing nowadays due to the sheer number of wargaming KS’s on there.

There’s also plenty of additional bolt-ons for potential funders, including scenics, battle mats and cups! (whoopee!) Its said the game can be played in 45 minutes and has a more RPG feel than a standard wargame, but given the size of the figures that is probably right. The figures themselves are resin and I have to say, look great, like I said before, overall the look is stylish and well polished indeed.

Now, here’s where I kind of poo-poo a bit, so to speak. Firstly, compatability. There will be lots of people who would potentially want to use other figures with the game, which with the scale size, is probably going to put some off. 75mm isn’t a usual size, so proxies will be a problem to sort. Next is that I feel that the cost is a tad prohibitive, but before you shout at me and stuff, I do think it’s kind of pricey with £50 for just two resin figures, and yes you do get dice and the actual game and fluff etc, but I think that’s rather on the steep side to shell out for a game with just two figures.

I realise the costs of a KS, and that all these additional factors need to be worked into the overall cost of the final prices, sure, but other than the figures, I feel there’s not too much meat on the bone for investors (you know what I mean?)