In an even more weird twist of events, it would seem our friend the Northampton Clown (Thanks for the favourited tweet, by the way!) has got himself a copycat, but this “killer clown” and his assistant gimp has come undone by the long arm of the law!

That’s right Carrickfergus in Northern ireland has it’s own creepy clown, no doubt in homage to the web sensation. Only thing is this one was seen hanging around some schools! Not surprisingly, the police weren’t happy with their antics, and the clown was forced to hand himself into the cops for scaring the kids! 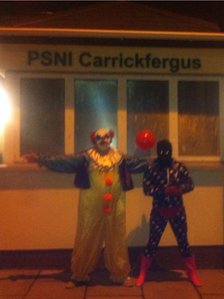 It doesn’t seem to have deterred him much though, as you can see with this pic taken later outside the copshop!

Are we living in a golden age of costumed characters that emerge to be spotted? How long before someone takes it a little too far? Will there be more, a clown for every town?