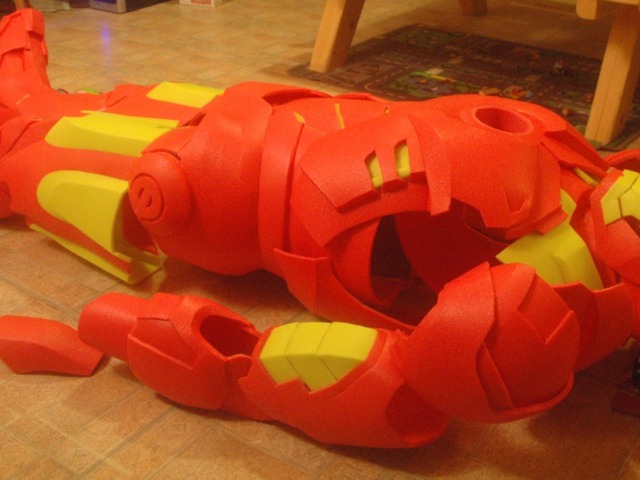 The thing I enjoy about looking around the Kickstarter site and its projects, is that I will find some real interesting and funny stuff there, and this is one of the latter.

TheOnlyTonyStark is trying to build himself a more robust version of this plastic carrymat Iron man suit! Well, he’s probably not anything like Tony Stark, or Robert Downey Jr either, but I don’t want to burst his bubble!

As you can see, the foam prototype isn’t too bad, and our Tony here is trying to raise the funds to get a more final all bells and whistles suit made if he succeeds!

Why? I really don’t know, but admittedly it would be cool to own one! Personally he ain’t got a prayer, even so he claims that this is so he can do visits to sick children in hospital (He’s all heart!!!) surely that kind of cash (£2000) be better spent on helping a kids charity, or donating a valuable bit of kit to the ward, rather than piss it up the wall with the construction of a replica costume!

Having worked in the industry making stuff like this, I can say 100% that unless you have access to a machine shop/workshop you’d struggle with this, and the price might be an issue too. Mistakes can really jump the price up, if you haven’t had some experience or don’t do your research about materials and construction, wiring and tech, the costs could really spiral. Not that I’m saying he doesn’t know what he’s doing, as its obvious he’s got a good grasp on the idea, but creating something solid in fibreglass or plastic for this purpose isn’t that easy.

I personally wouldn’t pay £1000 to get a carrymat ironman suit, thats just ridiculous, there’s plenty of great LARP companies and individuals out there who would be able to do a high grade foam and latex covered version for near that, or maybe a fibreglass moulded one. Another chancer trying for a freebie in a time of austerity.

I guess he could try and blag the LARP or Cosplay community for support, but you need a thick head and deep pockets if you support our Mr Stark. It just sounds as if he’s trying to blag for a free costume more than anything, which you and I know, is doomed to fail!

I wish him all the luck in the world, cos yer gonna need it!

Now I’m off to plan for my kickstarter to embed my bones with adamantium…..

3 thoughts on “I am Iron Man!! One man’s quest to become a superhero! (Kickstarter)”